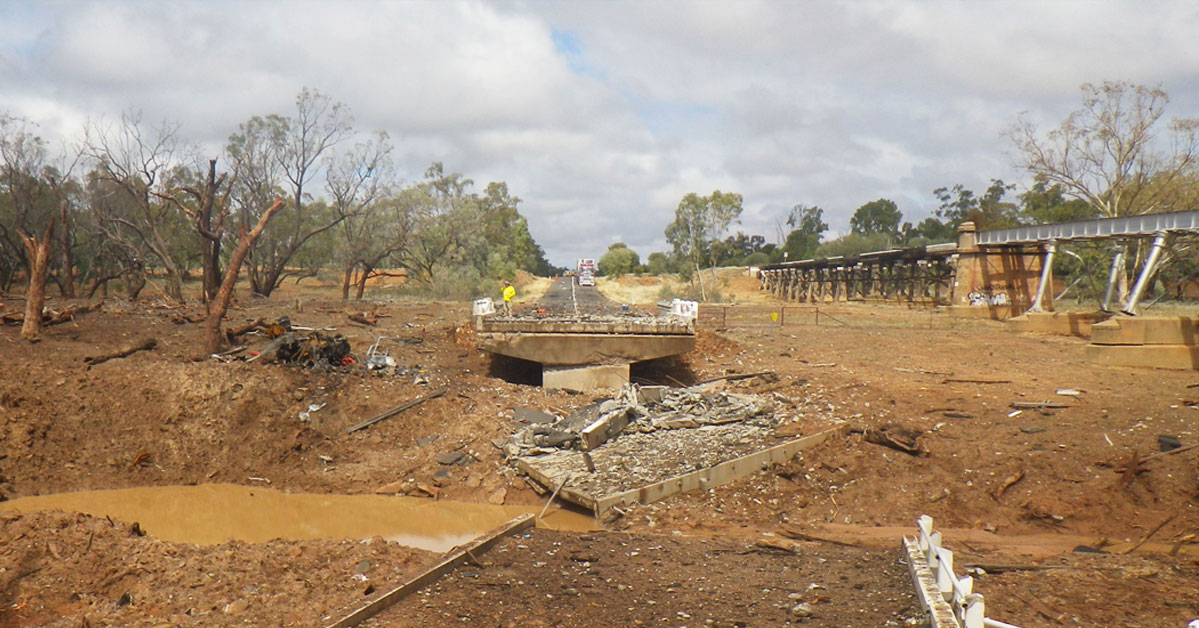 At approximately 10pm on Friday 5 September 2014, a truck carrying 50 tonnes of ammonium nitrate rolled over and exploded on the Angellala Creek Bridge approximately 30km south of Charleville on the Mitchell Highway.

The force of the explosion not only injured eight people, but destroyed the road bridge over Angellala Creek, irreparably damaged the Queensland Rail bridge and wiped out the surrounding landscape.

With the bridge destroyed, the Mitchell Highway was shut down. Being a vital link for freight and tourists travelling through South West Queensland, this closure could have meant significant impacts to the community.

Our department worked quickly with Murweh Shire Council to find alternative routes that would allow vehicles to navigate around the crater that the explosion created in the Mitchell Highway.

The department was granted possession of the site from the Explosives Inspectorate on 13 September 2014 and immediately started work to construct a temporary side-track to allow light vehicles to travel between Charleville and Cunnamulla. In just over two weeks, this side-track was completed.

On 7 October 2014, just four weeks after the explosion, a fully sealed side track opened to all traffic. This side-track not only catered for light vehicles but also allowed heavy vehicles thorough-fare, including type 2 road trains.

Staff were praised for their urgent action in efficiently restoring access along this vital stretch of road.

Throughout the response and recovery effort, many different areas from within our department (highlighted in the image below) banded together to deliver the response effort and construct the side track. This is an excellent example of our ‘One TMR’ value in action.

On 22 April 2015, we received the green light to rebuild the bridge. Piling works began in June 2015 and by July, all the piles were in place to start forming the headstocks and abutments.

By the end of July, the headstocks and abutment works had been completed and the decking units were ready to be put in place.

Come September, all the deck units had been put in place and work on the bridge approaches was well underway.

By the end of September, the approaches were completed and the deck wearing surface (bitumen) was applied to the bridge. The end of construction was getting close and the new bridge was really starting to come together.

The end of October seemed to come around fast! Considering that construction started in June and the new bridge was now finished and ready to be opened to traffic – it certainly did. This all happened in under five months – a great achievement in terms of recovery and rebuild efforts.

With the bridge construction complete and the approaches sealed and line marked, we opened the new bridge to traffic on 7 November 2015.

The new bridge is wider and higher than the previous one, and cost approximately $7 million to build both the side-track and bridge. This was $3 million less than initially estimated.

Now that construction of the bridge was complete, we decided that the new bridge should have a name – and not just any name – it needed to be something relevant to the south-west.

Coinciding with this, Queensland was commemorating 100 years since Australia’s involvement in the First World War with the Queensland Anzac Centenary Program (which runs from 2014 to 2018).

With this in mind, we asked our western communities to suggest a name that represented South West Queensland, recognised the commitment and sacrifices made a century ago and commemorated our ANZAC spirit.

We received some great suggestions, which gave our decision-making panel a lot to mull over. But in the end, there was one entry that stood out and struck a chord with the panel -‘Heroes Bridge’. Such a simple suggestion, but with such great meaning!

To support the suggested name, the nominee wrote ‘As with the ANZACs these brave men put their lives on the line to rescue their fellow man. This bridge could stand as a memorial and testimony of the successful outcome of their heroic act of bravery. Thus, the name “Heroes Bridge”.’

We are proud of all the people and teams involved in re-building the now called ‘Heroes Bridge’, so quickly, restoring this vital south-west transport route.