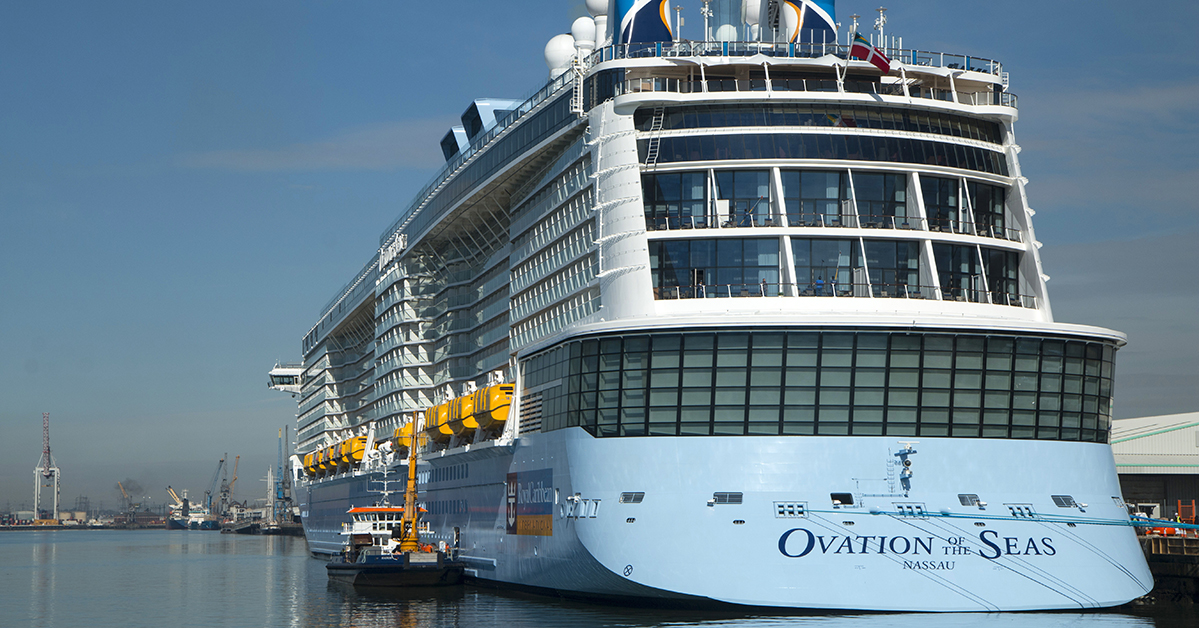 Woah-oh, the ships are getting bigger!

No, that’s not the catch line to a re-worked eighties hit for Mental As Anything.  But it is an accurate observation about our times as our ports play host to ever larger ocean-going ships of all kinds.

Leading the way in accommodating them is the Port of Brisbane which, on 22 February, is scheduled to receive a visit from the renowned 348 metre cruise ship Ovation of the Seas.

When she arrives the Royal Caribbean Cruises-owned ship, which entered service in April last year, will eclipse the 345 metre RMS Queen Mary 2 as the longest cruise ship ever to visit a Queensland port.

A visit of this kind does not just happen. Everyone associated with bringing the ship into port and getting her back out again – her crew, the marine pilot, the port authority and the staff of Maritime Safety Queensland (MSQ) – are aware that as a record breaker she will be testing the proven safe operating parameters of the port. Any mistake getting her in and out of port could result in a grounding or a collision with port infrastructure that could cause serious damage to both the ship and the infrastructure and, potentially, expensive delays to other shipping.

These risks need to be recognised, managed and – as far as possible – the skills required to achieve a safe visit need to be practiced.

Queensland is well served by Maritime Safety Queensland’s Smartship Australia, a state-of-the-art maritime simulator facility located near Brisbane Airport. Simulations are carried out to test the capacity of ports, their channels and other infrastructure to accommodate all manner of ships and their various designs and handling capabilities under every possible weather condition.

MSQ has undertaken extensive studies at Smartship Australia to optimise the port’s channels to accommodate the visit of the Ovation of the Seas.

While the simulations have proven it possible to bring the ship to port, MSQ will now use the results to place certain conditions upon the vessel’s movements and will closely monitor them utilising its Brisbane Vessel Traffic Services (VTS) team located at Pinkenba.

Experienced operators will have the ability to converse with the ship’s pilot, who will board the Ovation of the Seas off Mooloolaba, to provide any assistance the pilot requests or needs to guide the ship into and through Moreton Bay all the way to its berth at Fisherman Islands and back out again.

Thankfully the MSQ staff involved will not lack for recent experience under similar conditions.  That’s because the last day of November 2016 saw another milestone event for the Port of Brisbane and, indeed, for Queensland – the arrival of the containership Lloyd Don Carlos.

At 334 metres in length the 8,500 TEU (“twenty-foot equivalent units” – otherwise known as standard containers) containership became the longest cargo vessel ever to visit Queensland. It beat, by two metres, the length of the Antonis Angelicoussis, the coal carrier that had previously held the Queensland record it established at Abbot Point in April 2012.

Given the public’s enduring love affair with cruise ships the Ovation of the Seas will be the star of Brisbane’s current record-breaking run and can be expected to draw a crowd when she arrives.

But please take note: if you want to gain a good vantage point to witness it you’ll need to be near the mouth of the Brisbane River at Luggage Point on the north bank, well downstream of the Gateway Bridge.  The ship’s height and length are such that she cannot berth upstream at the Portside Wharf, which nevertheless still handles the majority of Brisbane’s cruise ship visits.

The visits of these two ship visits provide a very positive outcome for the port of Brisbane and the Queensland economy and MSQ, as the ship safety regulator, is proud to have played a key role in making it all happen.