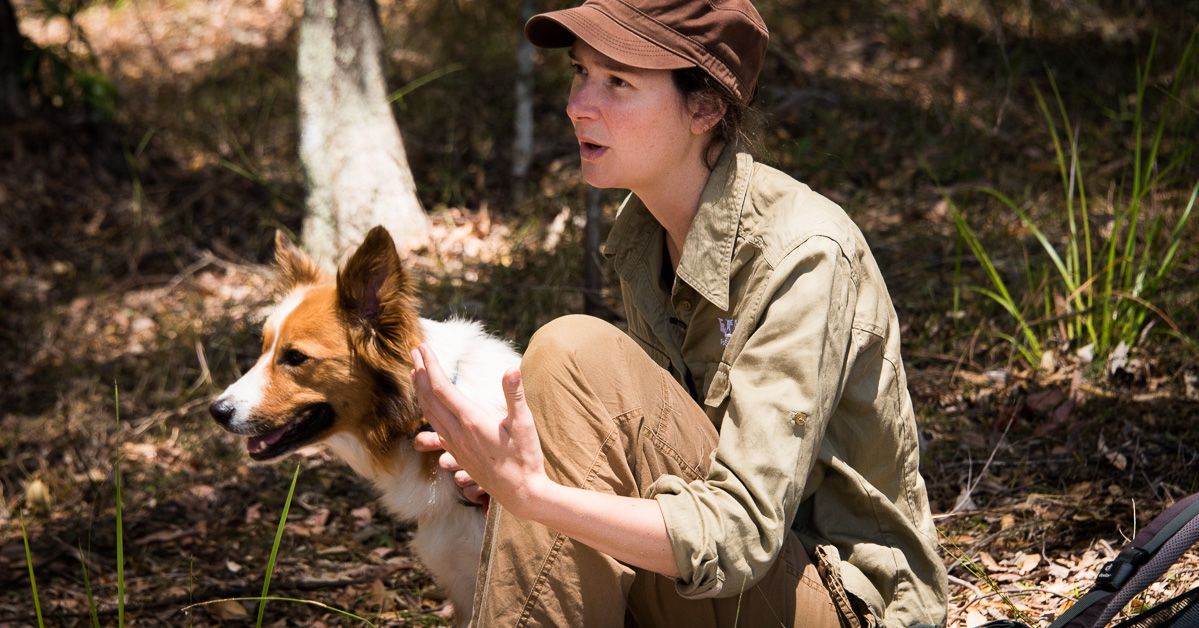 No doubt, in the coming weeks we will hear the annual desperate plea from organisations such as RSPCA to consider adopting an abandoned animal, rather than purchasing a puppy from a breeder this Christmas.

Many of these abandoned dogs will never find a “forever home”. This is thankfully not the case for a four year old Border Collie named Baxter, who, thanks to the Department of Transport and Main Roads (TMR) and the University of the Sunshine Coast’s (USC’s) Detection Dogs for Conservation (DDC) program, has a loving home and what could be considered one of the most rewarding “careers” a border collie could hope for.

Baxter is the latest recruit in a TMR funded research team that is looking at ways we can help Koalas by doing a better job of mitigating impacts from infrastructure projects (you can read more about this exciting research project here). The research is being undertaken as part of Section C: Traveston to Woondum of the Bruce Highway upgrade between Cooroy and Curra. Baxter’s special talent for finding koala poo (scats), coupled with his “high play drive” and “low prey drive” make him the perfect koala scat detection dog. Like all of the dogs at the DDC, Baxter is a rescue dog. Ecologists, animal lovers and lead researchers for TMR’s land offset research project, Dr Celine Frere and Dr Romane Cristescu, found Baxter after an extensive search involving more than 50 animal shelters across Australia. Baxter recently graduated from his training and now spends his days doing what he loves….sniffing out koala poo in return for ball games!

The little pellet shaped packages that Baxter sniffs out might not seem so attractive to you and I, but they are gold nuggets as far as our team of scientists are concerned. This is because koala poo is an incredible repository of information; it can tell us what a koala has been eating, how healthy it is, what its genetic make-up is and much, much more. Koala poo is also really hard to find. Imagine searching acres of bushland, looking amongst leaf litter, sticks and grass to find a small brown pellet about the size of your small toe

All of the dogs at the DDC go through extensive training and assessment processes, to make absolutely certain that they are not a threat to wildlife. This includes testing their “sensitivity” to prey by having them interact with small animals like chickens and guinea pigs (this occurs in a controlled environment and no animals are harmed during the process). Dogs with a low “prey drive” will ignore or show little interest in the prey and remain focussed instead on their ball and handler. In fact, most detection dogs have what we would call Obsessive Compulsive Disorder (OCD). They have an intense fixation with an object such as a ball and will do just about anything for a game of catch. The OCD behaviour though can also create problems for them in “normal” home environments, and probably contribute to them being abandoned.

Over the next few months, Baxter will be hard at work contributing to research that aims to improve our efforts at minimising impacts to koala populations from our transport infrastructure projects.

In the meantime, the hunt is on for a second TMR funded detection dog to join Baxter and the research team. If you think you know of a candidate, a good “first test” is to take the dog to a park and present them with a ball; if the dog ignores all other distractions (other dogs, smells and activities) and remains solely fixated on the ball, you may just have a detection dog in the making!

I will post more information about Baxter, his poo detection stories and the progress of this research program being undertaken as part of Section C in the coming months. Stay tuned!