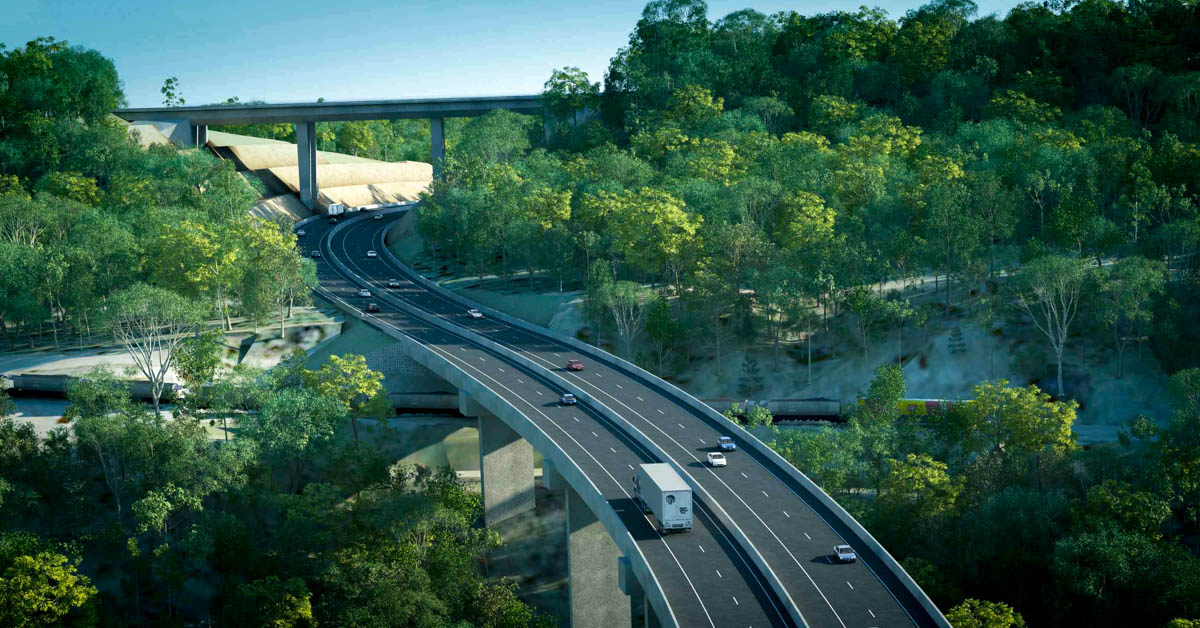 Major works for one of the largest road projects in Queensland, the $1.6 billion Toowoomba Second Range Crossing commenced today.

To mark the occasion, a time capsule was buried, to be opened in 25 years’ time.

A message from Director General Neil Scales OBE included in the capsule:

Today marks a momentous day in both the history and future of major infrastructure projects in Queensland.

My department, in its various incarnations over the years, has had a close connection with this project. We have been involved in planning and design for a crossing or bypass to support the region’s growth for the better part of the past two decades.

The need to build a transport option to alleviate the traffic and issues associated with the Toowoomba Range has been a priority for many years, and state and federal government funding and endorsement was vital to finally getting the project off the ground.

In early 2016, we started preliminary construction activities including geotechnical investigations, pavement condition surveys, underground service locations, survey works and site establishment works. Major works begin today with vegetation clearing and the start of earthworks and structures. Construction will take about 2.5 years, and the toll road is expected to open in late 2018.

The design has also extended the length of 4 lanes (2 lanes each way) along the route from the Warrego East at Helidon Spa to the Warrego West interchange.

The original tunnel solution, as detailed in the reference design, did not accommodate the passage of certain dangerous goods and excess-dimensional heavy vehicles.

The open-cut solution through the Toowoomba Range will accommodate over-dimensional and all classes of dangerous goods vehicles. Another innovation will be the truck coupling and decoupling areas near the western interchange with the Warrego Highway, and arrester beds on the downhill section east of the range crossing for additional safety.

A viaduct on the eastern side of the Toowoomba Range over the existing Queensland Rail line has been extended to 800m long, providing reduced impacts on fauna. The 5m wide benches on cuttings and embankments will provide improved geotechnical stability and overall safety for drivers using the TSRC.

A project of this size and scope does not come without challenges. The TSRC is unusual in an Australian context due to the degree of difficulty in building 41km of new road across highly variable terrain, including steep hillsides while ensuring there is a maximum gradient of just 6.5%. This is required to ensure the toll road provides a faster, safer route for heavy vehicles of all types, when compared with the existing Toowoomba Range crossing, which has gradients up to 10%.

The 30m deep cutting through the Toowoomba Range also provides for a superior outcome in terms of whole-of-life costs for the TSRC. It avoids the requirement for maintenance of tunnel structures and reduces energy requirements to operate a tunnel, particularly tunnel lighting and ventilation.

In delivering this important project, the Queensland Government brought together a balance of global leaders in road construction and social infrastructure with a track record of successful local project delivery, which will combine with local Queensland-based resources for excellent outcomes.

Active engagement with stakeholders and residents – while a part of our business as usual requirements in any infrastructure project – has been extremely important on this project. We have taken great measures to work closely and positively with the Traditional Owners in the area, the Western Wakka Wakka and the Jagera People.

There are local members of the public who have been promised a bypass of some description for a generation, and we need to make sure expectations and communication are transparent and positive. The commitment to engage contractors from local work sources has also gained much attention.

Our project team is capable and experienced, and we are well on the way to delivering a world-class piece of infrastructure to southern Queensland.

Department of Transport and Main Roads – a snapshot

As Director-General of the Department of Transport and Main Roads (TMR), I’m responsible for one of the most visible government departments, with a massive presence across the state. We have an important responsibility to the community – almost every Queenslander uses our roads and transport system every day.

With a strong workforce of more than 8,500 employees working at more than 90 locations, we shape the system, build the network, manage the use of the system and provide passenger services. Queenslanders expect and demand a world-class transport system. To achieve this, TMR continues to deliver a progressive program of works across the state.

As the second largest state in Australia, Queensland covers an area of 1.7 million square kilometres.

We provide passenger transport services and facilities, including busway park ‘n’ ride and station facilities. As a department, we connect geographically dispersed centres by building and managing an extensive road network and integrated transport system.

The $3.9 billion Queensland Transport and Roads Investment Program (QTRIP) is TMR’s continuing commitment to deliver an integrated, safe and efficient transport system that connects communities across the state.

We build and maintain marine and boating infrastructure assets, develop and fund bikeways and pedestrian facilities, as well as manage and acquire property for transport infrastructure purposes, including road reserves for motorways.

Some of our major projects currently in different stages of development include the $1.14 billion Gateway Motorway Upgrade North between Nudgee and Bracken Ridge, Stage 2 of the Gold Coast Light Rail, and Section C of the Bruce Highway Upgrade between Cooroy and Curra. Planning for the Cross River Rail project, one that could revolutionise public transport travel in Brisbane, was also announced just last week.

Putting that into perspective, $3.9 billion is roughly the equivalent of the gross domestic product (GDP) of the Republic of Maldives. That’s a lot of money and a huge responsibility for the department and our leaders, but one that we are very capable of achieving.

Our transport network is the backbone of the Queensland economy and will continue to help drive Queensland’s prosperity into the future.